Public Lecture: “To bring the state back” : mining conflicts and 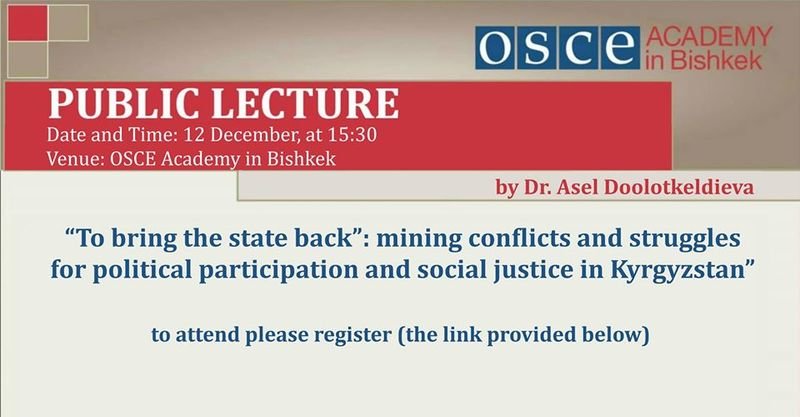 Public Lecture: “To bring the state back”: mining conflicts and struggles for political participation and social justice in Kyrgyzstan”

Abstract: The present paper explores the political economy of extraction in post-socialist Kyrgyzstan. Since the early years of independence, some mining projects along with poor governance practices have been implicated in human rights abuses, disruption of ecosystems and heavy social and environmental impacts on communities. Despite this, gold mining has been termed the motor of the economy of the post-independence era. The development of the industry by foreign investors, however, has been accompanied by intense contestation from local communities, political parties and civil society. With very few exceptions, existing regional literature has been looking at extractive conflicts through the prism of CSR and mining governance, overlooking the ways such conflicts underwrite the general processes of not only the neoliberalization of natural resources, but neoliberalization of citizen political rights. I look beyond this business centered approach and connect to the more critical literature on the mining boom in the Global South. I view current mining conflicts as contestations of the politico-economic model that was established in Kyrgyzstan in early independence and as a call for the democratization of extraction and politics in general. Using political ethnographic methods, I explore the perspectives of local communities on the current economic model of ‘extraction for export’, and the ways they struggle against mining companies and the Kyrgyz government.

Short Bio: Dr. Asel Doolotkeldieva is an Assistant Professor at the American University in Central Asia and Associate Research Fellow at the OSCE Academy, she holds PhD in Politics from the University of Exeter (UK) and Master’s degree in Comparative Politics from Sciences Po Paris (France). She is largely interested in social mobilizations, state-business relationships, state-religion relationships, electoral politics, extractive industries, and informality.